As the demonstration and discussions about the killing of Keith Scott continued, The New

York Times found an activist voice to explain what was going on. On the Op-Ed page, Rev. Dr. William Barber published “Why are we protesting in Charlotte,”  offering moral and religious motivations for his presence–along with that of many other clergy–at the protests. Barber explained:

In the Scriptures, the prophet Jeremiah denounces false prophets for crying “peace, peace when there is no peace.” We cannot condemn the violence of a small minority of protesters without also condemning the overwhelming violence that millions suffer every day.

But Reverend Barber didn’t emerge in the national news from out of nowhere. Over many years, he had been building an activist career on issues exactly like these, and when the Times sought an informed and respected voice, he was experienced and ready.

Since April of 2013, Rev. William Barber has been leading protests outside the state capitol in Raleigh, North Carolina. The Moral Monday (discussed here) protests focused on policy, specifically the new political agenda that Governor Pat McCrory and a Republican majority in the state 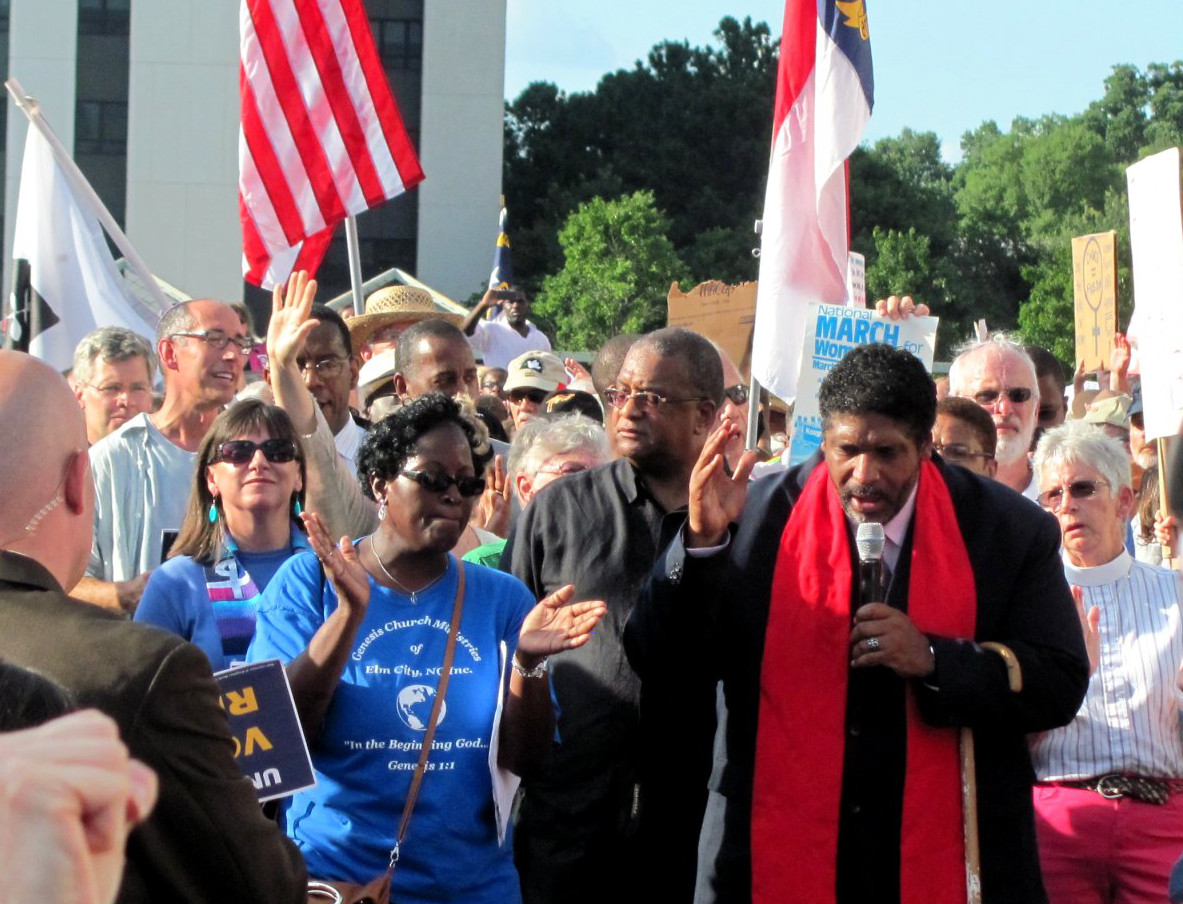 legislature were pushing: measures to require photo ID to vote, restrict unemployment insurance and Medicaid. raise sales taxes to cut income and property taxes. relax environmental regulations, and cut funds for public schools. He lost on almost all these issues–at least in the short run.

But the protests continued, and have inspired like-minded efforts in neighboring states. (The Moral Monday campaign in Georgia supports an informative website.) In North Carolina, the campaign is explained on the site of the state NAACP; Barber is its president. In addition to the NAACP work, Rev. Barber, who holds a doctoral degree in theology,  and serves as pastor of the Greenleaf Christian Church in Goldsboro, about a 3 1/2 hr. drive from Charlotte, where he’s been demonstrating. nuing work in North Carolina helped him develop local credibility and contacts as well as national visibility. His persistence and visibility earned him a prime time speaking slot on the fourth night of the Democratic National Convention, where he outlined a vision of social justice that comes straight from the Biblical prophets.

This is another way in which protest matters, even if not at the time or in the way that activists hope.