All-star politics and the messy influence of protest; Black Lives Matter and basketball

The National Basketball League plays its annual All-Star Game in New Orleans this long weekend, offering an odd window into an impact of protest movements. (Note: David Zirin has been writing about this for a while.)

Despite its charms, New Orleans was not the NBA’s first choice location for the game. The league relocated the game from Charlotte months ago, a protest against anti-gay legislation passed by North Carolina.  Here’s the NBA’s statement from July:

The NBA has decided to relocate the 2017 All-Star Game from Charlotte with the hope of rescheduling for 2019.

Since March, when North Carolina enacted HB2 and the issue of legal protections for the LGBT community in Charlotte became prominent, the NBA and the Charlotte Hornets have been working diligently to foster constructive dialogue and try to effect positive change. We have been guided in these discussions by the long-standing core values of our league. These include not only diversity, inclusion, fairness and respect for others but also the willingness to listen and consider opposing points of view.

Our week-long schedule of All-Star events and activities is intended to be a global celebration of basketball, our league, and the values for which we stand, and to bring together all members of the NBA community — current and former players, league and team officials, business partners, and fans. While we recognize that the NBA cannot choose the law in every city, state, and country in which we do business, we do not believe we can successfully host our All-Star festivities in Charlotte in the climate created by HB2.

We are particularly mindful of the impact of this decision on our fans in North Carolina, who are among the most passionate in our league. It is also important to stress that the City of Charlotte and the Hornets organization have sought to provide an inclusive environment and that the Hornets will continue to ensure that all patrons — including members of the LGBT community — feel welcome while attending games and events in their arena.

We look forward to re-starting plans for our All-Star festivities in Charlotte for 2019 provided there is an appropriate resolution to this matter.

Moving the All-Star game puts a little bit of financial and social pressure on the people of North Carolina, perhaps weakening soft support among conservatives willing to sanction freedom to discriminate. It also makes a national statement of the league’s values. No doubt, some basketball executives see the move as a statement of their values, but those who made the decision surely also see it as a way to get in front of social values that are changing quickly. Whatever else the statement is, it’s also a business decision. e of legislation, but built over time. Reserve center Jason Collins, at right, came out in 2013, after more than a decade in the league. With the explicit support of the management and players of the league, he finished out a career in accord with his basketball contributions to his teams.

But the league and its players have become outspoken on many issues. Above you can see the Miami Heat, posing with hoods up to stand up for Trayvon Martin, identified as suspicious and killed by a neighborhood watch volunteer put off by Martin’s hoodie. 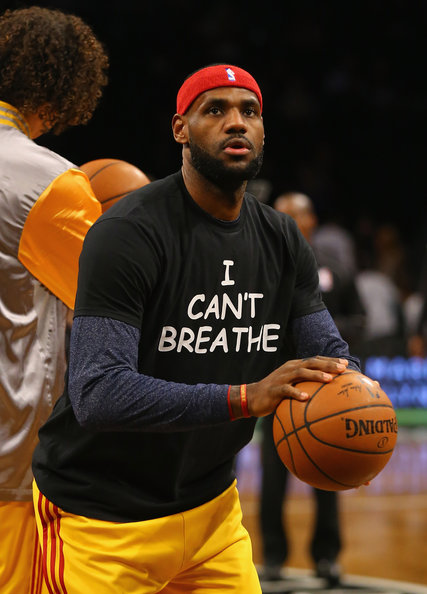 ring a jersey intended to draw attention to the police killing of Eric Garner in New York. Garner’s last words, repeated as he was sprawled on the ground and choked by an armed officer, became a rallying cry for Black Lives Matter. James and other players took up the call. It’s hard to imagine such a strong public stance on the courts without thousands of other people taking even stronger stances in the streets. The protests focused players’ attention on the issue of police violence, and the players gave the movement an additional public face.

And as players see themselves as citizens as well as athletes–extraordinarily well-compensated workers–they don’t draw sharp lines around the issues they engage.

Donald Trump’s election has produced more provocations, and the league’s stars have responded. The top coaches in the league, including Steve Kerr and Gregg Popovich, have consistently challenged Trump on racism and misogyny. The league has featured star players from diverse backgrounds for many years, including Muslims for decades, and the coaches criticized the travel ban and defended diversity. Following their players, at least three teams have announced that they will no longer stay in Trump’s hotels when traveling.

Superstar Stephen Curry challenged his sponsor, Under Armour, when its CEO Kevin Plank described Trump as an “asset” to the country.  According to Curry: perhaps if you deleted the “et.” Plank walked back his praise, announcing the company’s commitment to diversity and its commitment to opposing the travel ban.

It’s not a consequence you can easily code, but the lines of influence are really clear.

2 Responses to All-star politics and the messy influence of protest; Black Lives Matter and basketball