March for Science in Berlin

This weekend’s March for Science turned out hundreds of thousands around the world, with particularly large turnouts in Washington, DC, and Chicago. For yet another protest weekend, a week before the Peoples Climate March, this level of participation was pretty impressive.

Many of the demonstrators leaned into geektron identities as scientists, sporting knitted pink brain caps, wearing lab coats, and carrying signs deploying obscure formulae or the kinds of puns that elicit groans even in faculty mail rooms.

The run-up to this demonstration evinced disputes among scientists. Arguing against politicizing science, coastal geologist Robert S. Young worried in The New York Times that

A march by scientists, while well intentioned, will serve only to trivialize and politicize the science we care so much about, turn scientists into another group caught up in the culture wars and further drive the wedge between scientists and a certain segment of the American electorate.

Science is supposed to be outside politics, where evidence eclipses gut feelings, and commitments are to a process rather than a specific outcome. Science can inform protest movements, to be sure, about automobile safety or climate change or vaccinations, to cite just a few examples, but politicizing support for inquiry risks further polarizing an already divided citizenry, as well as fostering cynicism and distrust for the very process science is supposed to promote. A placard is an awkward space for making arguments about standards of evidence.

Here’s a few ideas about how we got here specifically, and some general comments about the important and difficult role of science and expertise more generally in a democracy. 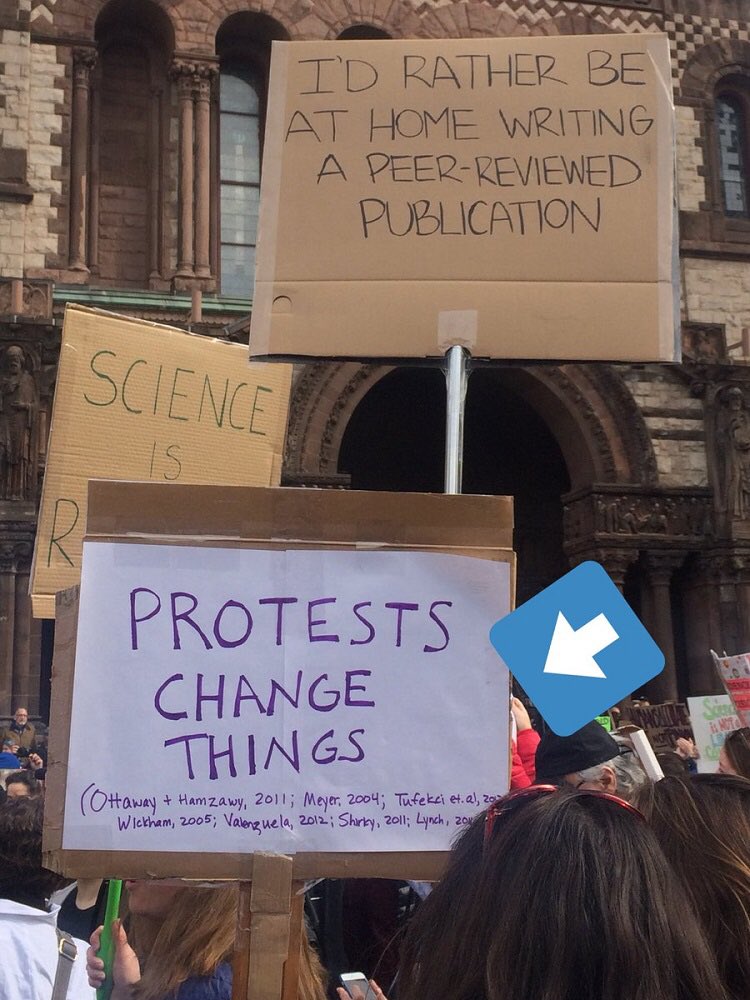 e Saturday’s March for Science a viable political strategy. As a candidate, and so far as president, Trump has emphasized complete disdain for normal ways of learning things–like studying, reading, or listening to experts. He has instead trumpeted the excellence of his brain, sometimes with reference to genetics and accomplished relatives, and, above all, his gut instincts. He proclaimed his disinterest in learning the names of world leaders or even countries, and announced positions on phenomena like climate change or crime rates in terms of his own faith. When the weight of evidence, data, or professional judgment arrayed against those beliefs, he reflexively dismissed it as fake.

The studied absence of evidence or expertise from policy debates about the environment, international relations, nuclear weapons, or even taxes, was provocative all by itself, but Trump coupled with a commitment to weakening the institutional infrastructure of science. The Trump administration promised large cuts to the National Institutes for Health, the Environmental Protection Agency, agencies that had been severely underfunded for more than a decade.

If the administration displayed no interest in the results of scientific inquiries, it saw no reason to offer much in the way of support for producing new knowledge.

Trump threatened the public good with poorly-informed policies; he also threatened those who produced science by promising to spend less on almost everything. Remember, spending on science means jobs not only for scientists and scholars, but also custodians and administrative aides, suppliers of microscopes and media, and all the grocers, cleaners, and barbers they patronize.

Perhaps the ongoing funding crisis in both education and science should have spurred a movement five or ten years ago, but the added denigration of evidence and the pursuit of truth proved to be the necessary add-on for broad mobilization. (For its part, the Administration issued a response to the demonstration by announcing its commitment to rigorous science–unless it was inconvenient.)

Beyond Trump, there is a larger challenge in balancing science and expertise with democracy. Ameria’s founders, overwhelmingly, were men of science and study who harbored great skepticism about popular wisdom. Although they created avenues of participation for regular citizens, they didn’t want to be bound by policies made by popular majorities.

But Donald Trump’s previous success came in entertainment; he’s made money by pleasing an audience, essentially giving some people what they want. Paradoxically, this is a big problem for democracy.

Now, properly practiced scientific investigation doesn’t generally provide unambiguous answers about matters of policy, but real information should matter. Upon learning that a ship sailing off into the distance won’t fall off the edge of the earth, no one is obliged to send ships off into the distance–but something becomes possible. Assessing the extent of human made climate change doesn’t mandate a carbon tax or regulation, but it does suggest the necessity of a discussion.

In the early days of the American republic, leaders were apprised of public preferences, but insulated enough to pursue the policies they thought wise without much fear of reprisal. As democracy spread, effective leaders took on the obligation of bringing the public along with them, listening to public opinion, but informing and trying to shape new possibilities.

Meanwhile, think about Dwight Eisenhower, responding to the shock of the Soviet Union’s launch of Sputnik. President Eisenhower identified the Soviet satellite launch as an essential security threat, coming to the American people to ask for higher taxes to support the military. But Eisenhower didn’t stop there. He argued that America had to invest in its own future, through building infrastructure of all sorts, and especially by investing in education and science. The cold war was a foundational challenge to America, one which demanded a substantial response. In a televised address in November 1957, he laid out a broader vision of national security:

We should, among other things, have a system of nation-wide testing of high school students; a system of incentives for high aptitude students to pursue scientific or professional studies; a program to stimulate good-quality teaching of mathematics and science; provision of more laboratory facilities; and measures, including fellowships, to increase the output of qualified teachers.

The biggest part of the task is in the hands of you, as citizens. This is National Education Week. It should be National Education Year. No matter how good your school is–and we have many excellent ones–I wish that every school board and every PTA would this week and this year make one single project their special order of business. This is to scrutinize your school’s curriculum and standards. Then decide for yourselves whether they meet the stern demands of the era we are entering…

Young people now in college must be equipped to live in the age of intercontinental ballistic missiles. However, what will then be needed is not just engineers and scientists, but a people who will keep their heads and, in every field, leaders who can meet intricate human problems with wisdom and courage. In short, we will need not only Einsteins and Steinmetzes, but Washingtons, and Emersons.

Another long-term concern is for even greater concentration on basic research–that is, the kind that unlocks the secrets of nature and prepares the way for such great break-throughs as atomic fission, electronics and antibiotics.

An American democracy depends upon science not just to give people what they want (flying cars? fat-burning pills?), but also the capacity to make informed decisions about what they might want, and how they might get it.