Berkeley has become the indispensable stop on the right-wing lecture circuit. Antifa (anti-fascist) groups in the Bay Area now reliably turn up on campus to try to make sure

Oakland Antifa has already announced a demonstration against rightwing provocateur Ann Coulter, and its willingness to work to shut her–and others like her–down.

A potentially violent response like this is, of course, catnip for conservatives who make their living provoking conflict.

Two months ago another provocateur, Milo Yiannopoulos visited Berkeley to promote himself and his forthcoming book, then under contract to Simon & Schuster, which had reportedly given the self-described troll an advance of $250,000. The demonstrations, the violent conflict, and the ensuing damages all provided Yiannopoulos and the press with lots of free attention. Shortly afterward, S&S withdrew the contract when videos featuring Yiannopolous lauding sex with underage boys, but the Berkeley College Republicans who invited him to campus learned their lesson.

So did Ann Coulter, who eagerly accepted their invitation to speak.  She also has an interest in claiming space in the media and selling books. Even Coulter’s most recent decision, to cancel her speech, has brought the very public figure extra attention–and some support. Indeed, in the wake of the cancellation, Yiannopoulos has promised to return to Berkeley–bringing his own paramilitary security.

Expect other publicity hungry conservatives to work to wangle their own invitations at Berkeley.

On the second question, I fear that as someone who works on a college campus, my answers are going to be pretty predictable. I would be appalled if an academic unit, like a political science department, was willing to front the expense of bringing a Coulter or a Charles Murray to campus, largely because they contribute no more to the understanding of politics than they do to chemistry. By the way, Coulter’s quote for a visit ranges from $20,000-50,000; Charles Murray costs between $30,000-50,000. It’s hard to justify those costs as a reasonable expenditure of student fees.

But campus groups, like the College Republicans–or the Green Fundamentalists or the Young Hegelians–also contribute to the diversity of activities on a college campus. Mostly, they should invite whomever they want. I’d be astonished if Coulter didn’t offer a massive discount in her fee to go to Berkeley, just because any violence and disruption that attends her talk is such great publicity for her.

On a vital campus, there should be far more visits and speeches than any student could ever attend, including the presentation of ideas he or she will find patently offensive. 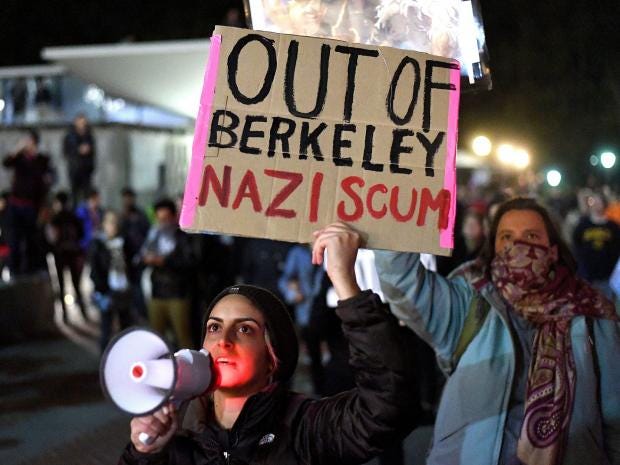 Protesting outside or asking hard questions inside are completely acceptable responses to an offensive speaker. So is just staying home. (Actually, that was the advice given by Senator Elizabeth Warren, who defended Coulter’s right to speak.)

We all have an interest in the free flow of ideas, and that means protecting unpopular, uninformed, and hateful speakers. Today’s activists should recall that those on the left have always been more likely to be silenced than those on the right.

Now about antifa goals: Coulter, Yiannopoulos and others on the right campaign against what they describe as a culture of liberal intolerance. I think this is a tough case to make honestly, but violent protests offer undue support for the claim.  Rather than “making fascists scared to speech,” the protests publicize and valorize them. It doesn’t seem smart to me. And responding reflexively with disruption to every offensive voice on the right just makes Berkeley a don’t miss spot on every troll’s book tour.

2 Responses to Free speech on campus? Provocation and protest.