Protest can exercise influence by disrupting the usual politics of the moment, and there are lots of ways to create disruptions, and different people have vastly different opportunities. 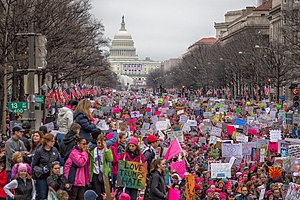 Large demonstrations are one way to show strength, but you need to generate lots of people, as the Women’s March did earlier this year.

For those deeply entrenched in positions of power, sometimes disruption only requires saying no. Over the past day or so, four corporate leaders resigned from the Trump administration’s advisory American Manufacturing Council in response to Trump’s tepid response to the violence in Charlottesville. (Elon Musk, of Tesla, had already left the Council over Trump’s decision to leave the Paris Accord on climate change.)

Kenneth C. Frazier, the Chief Executive Officer of Merck pharmaceuticals was the first to defect, explaining that it was a matter of moral conscience. The president quickly attacked him and his company on Twitter, but Merck’s share price increased over the day. Bizarrely, Trump was able to elicit sympathy for the had of a multinational drug company. At the end of the day, Frazier was followed by by Kevin Plank, CEO of Under Armour and Brian Krzanich, the CEO of Intel.

Trump pilloried the defectors as “grandstanders,” proclaiming that he had three replacements available for each of them. Then, Scott Paul, the president of the Alliance for American Manufacturing, resigned as well, because “it’s the right thing for me to do.”

The business protest doesn’t make for great pictures, placards, or police involvement, but it can matter.

Note: It’s a little easier for the second defector than for the first, and even easier for the 47th, and more CEOs may follow. If enough defect, it may become financially unwise to continue to work with the administration.