Flags at half-staff in Nevada

Gun control supporters need to respond to the awful Las Vegas shooting with the same speed and focus the police showed in response to the shooter. Before the FBI and police have finished conducting their investigations and cleaning up the debris on the strip, before any of the victims have been discharged from the hospital or buried, gun control groups must fill the airwaves and the Internet with concrete proposals to make America safe(r) again.

True American carnage, the shooting in Las Vegas makes the consequences of our easy access policy to firearms unusually clear. The vast majority of Americans don’t think about guns, much less silencers, most of the time, more concerned with economic inequality, carpool schedules, climate change, or the cost of cable tv. An engaged slice of America, including the gun industry, cares deeply, invests aggressively, and is extremely well-represented by the National Rifle Association. Most of the time, largely playing defense, this minority rules–ruthlessly and recklessly. 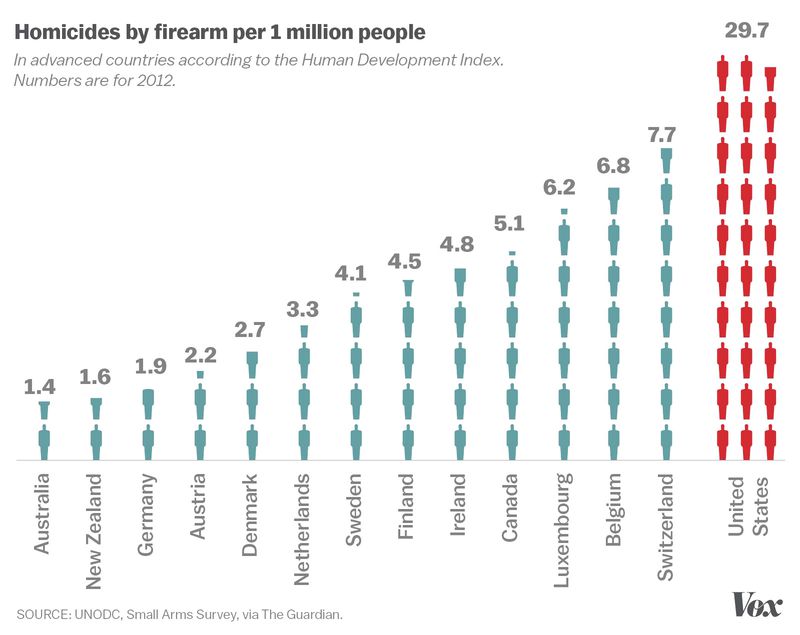 Opponents of sensible gun control will lament the presence of evil, sending thoughts and prayers into the ether, until this moment of clear vision passes. Unlike evil, guns can be regulated and the damage people inflict with them limited. (See chart above: everyone else does.) Enemies of gun control pray that public attention to the costs of our gun policy will pass when the next hurricane hits or the president again tweets about the national anthem.

The NRA has postponed airing its newest ad campaign. Donald Trump has called for prayer and unity, while the White House and Senator Majority Leader Mitch McConnell have called for mourning, rather than action, suggesting that political debate at the moment is unseemly.

The waiting game is a good strategy for those who are winning. Fans of easy access to guns would prefer not to talk about their plans when lots of people are listening carefully.

But gun control proponents, massively outfunded and usually out-organized, must seize the moment before the smoke has all cleared.

3 Responses to Politicize this tragedy