Trump speaks for himself at the March for Life

Donald Trump became the first president to address the annual anti-abortion March for Life this week and he made this year’s event about about himself.

“Unborn children have never had a stronger defender in the White House,” he bragged to a cheering crowd, estimated in the tens of thousands.

The March for Life is an ongoing organization and an annual event. 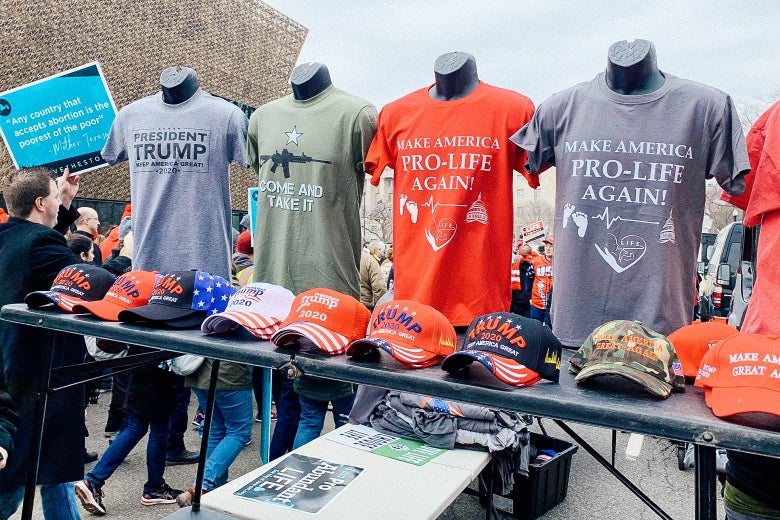 It gives activists a vehicle for expression and for organizing their opposition to the 1973 Roe v. Wade decision. Previous Republican presidents since Ronald Reagan, and including Trump, have phoned in support on what’s usually a cold day, but this is an election year and Trump plans to ride this enthusiastic base.

Anti-abortion activists were luke-warm or less about candidate Trump, but rallied behind the nominee in opposition to Hillary Clinton, a strong champion of abortion rights. Although new to the crusade against abortion, as president Trump has delivered–judges. Lots of them. Young, conservative, and committed.

Getting a president to appear in person is an unambiguous score for the anti-abortion,  movement, but it further solidifies the issue as a partisan one: it’s impossible to imagine a successful national candidate for office taking the wrong position for their party.

Encouraged by Trump’s judicial appointments, ambitious activists and legislators in some states have gone from nibbling to chomping away at abortion access, expecting affirmation from the courts. Trump is counting on those passionate activists to turn out in November to help him stay in office.

But it might work the other way as well. Increased restrictions on abortion access could well raise the importance of the issue for the other side. Support for abortion rights has climbed in public opinion polls, and is strongest among younger people. A Supreme Court decision that allows states more latitude in regulating access to abortion is likely to encourage activists on both sides of the issues to jump into politics. Outcomes will vary tremendously across the states, but the 61 percent who say they generally support abortion rights is far larger than the 38 percent who oppose those rights.

The battle to reverse Roe is one Republicans have wanted to wage for nearly fifty years, but it’s far from clear it’s one they want to win.

Author and professor of Sociology and Political Science at the University of California, Irvine
View all posts by David S. Meyer →
This entry was posted in Uncategorized and tagged antii-abortion, commemoration, Donald Trump, elections, Hillary Clinton, March for Life, Roe v. Wade. Bookmark the permalink.