It starts with snarky side comments in front of reporters and on Twitter, continues through allies–and other Trumps–disparaging disloyalty and demanding that Romney be ousted from the Republican caucus, and will escalate to threats against the personal safety of Romney and his family.

: at some level, Trump understands Machiavelli’s dictum that it is better to be feared than loved.

Loyalty is affiliation that supersedes considered judgment or impulse. We root for a favored team, frequent a familiar restaurant, or forgive a familial trespass because of loyalty. Loyalty means that friends can count on us even when it might be inconvenient. And the further you’ve gone to demonstrate loyalty, the stronger that affiliation will be. (Agreeing to pick up a friend from the airport will increase your commitment to that friend!)

Loyalty can come from tradition, from experiences, and from affection. It can also come from fear.

In the impeachment proceedings, Trump demanded–and received–lockstep fealty from the Republican caucus in the House and (almost) the Senate. The legal arguments and factual assertions were extraordinarily weak, but this really didn’t matter. Trump was clear that he–and his supporters–would punish defectors. Indeed, if we’re to believe Democratic Senator Sherrod Brown (Ohio), Senate Republicans know that their president is guilty and unstable, but they fear crossing him. After all, insufficient support for this president effectively ended the political careers of Jeff Flake and Bob Corker, episodically mild Republican critics in the Senate.

Run through the electoral logic: Senators who should know better, say Ben Sasse (Nebraska) or Lindsey Graham (South Carolina) are running for reelection in overwhelmingly Republican states where Trump remains popular. A pointed tweet can enable a primary opponent who will make life (and reelection) at least a little more difficult.

It’s worse for so-called moderates in swing states like Cory Gardner (Colorado) or Susan Collins (Maine): loss of enthusiastic support from even a small portion of the Republican base would be damning, and a little moderation won’t buy you any swing voters in the current political environment.

Of all the Republicans in the Senate, Romney was perhaps the very best situated to weather the upcoming onslaught. Extremely wealthy, well-respected in Utah, his presidential aspirations are also past. Romney isn’t up for reelection until 2024, when Trump might just be a remembered nightmare. 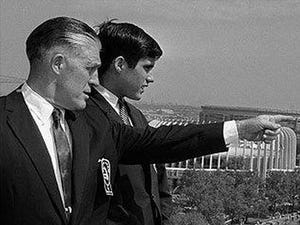 from Michigan who opposed conservative Barry Goldwater’s nomination in 1964, and then came out against the Vietnam War in 1968. Romney the Elder never became president, and lost the support of his party.

For the first decades of his career, the lessons young Romney took were about the importance of political flexibility rather than moral rectitude. Romney’s flexibility on abortion, on health insurance, and even on Trump, are well-documented and dispiriting. And they didn’t bring him to the White House.

I believe that Mitt Romney’s explanation of his judgment and his commitment to his oath and the Constitution are genuine. But it’s important to realize that he was in a better position to act on them than many of his colleagues.

I think more than a few other Republican senators could have also withstood a Trumpian attack (obviously, they disagreed). It’s critically important for Trump to show that I’m wrong–and far more importantly, that Romney was wrong. Trumpians have to punish Romney so severely that other Republicans are scared to follow the Utah senator’s model.

It IS going to be ugly.