Intensive care nurse Lauren Leander got a respectful hearing on CNN Thursday night, as she explained to Chris Cuomo why she decided to spend her day off staring down open up

A few nurses dressed in clean scrubs, donned masks, and stood silently as they suffered ridicule and abuse from a few of the reported 1,000 protesters violating the stay at home orders of Arizona’s Republican governor, Doug Ducey.

Asked about the unmasked protesters who reject government restrictions on their movement or commerce, Leander responded, “You know, I would just love to be able to take them into the hospital with me and to, you know, put them in a pair of scrubs and to get them to see just the suffering that’s going on in the hospital with these covid patients that are isolated from their families and that are dying alone.”

Effective protest politics plays with symbols and creates images. Open up protesters in Phoenix carried placards about liberty, waved flags, wore Trump t-shirts, and carried weapons. They clearly meant to send a message that they were patriotic, powerful, and political. In addition to the shouts, there was an implicit threat that they were willing to break more than a quarantine.

Leander and her colleagues countered with professionalism. They were few and they were silent and still. Images of the confrontation spread around the web, and surely, anyone can see what they wish in the picture. But in telling her story, and essentially welcoming all the backlash that will follow online and beyond, the nurse explained that she saw the consequences of a global pandemic in her patients, while the marchers saw only the costs of the quarantine that was a response.

I don’t know where the nurses’ courage and commitment came from.

But Lauren Leander explained where they got the idea for uniformed silent protest. She explained that they were inspired by others who had already confronted open up protesters:

You know, we were really inspired by the other viral photos from the health care workers in Denver, you know, that were going around the internet, and we just were so impressed by their action and just the power in their silence and what they did. And we said yes, like, that’s the kind of action that we can take for something like this. That’s what we can do. 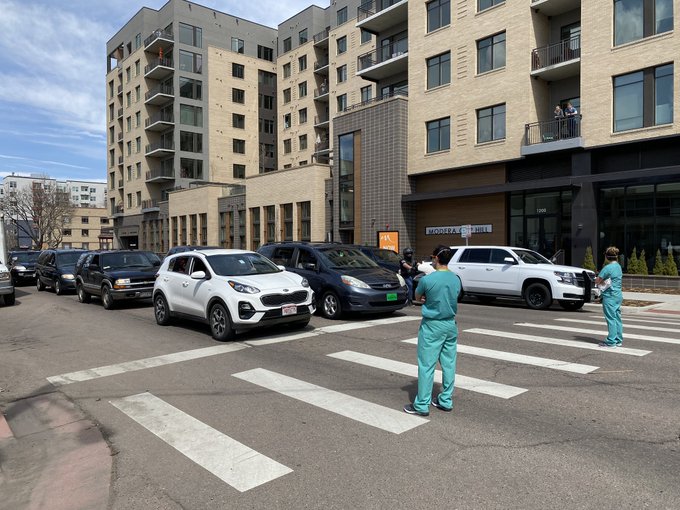 The few protesters who blocked the traffic of a drive-in protest in Denver’s downtown didn’t release their names or tell their stories, but the powerful photos by freelancer Alyson McClaran, circulated everywhere.

The images appeared on Twitter and Facebook well before they were taken up in more conventional media. The debates on social media were at least as heated and partisan as what took place in the streets. 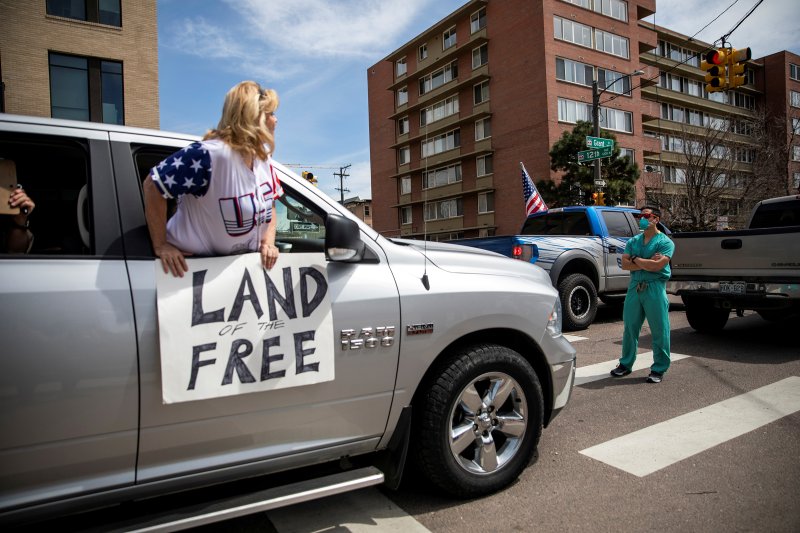 blocking traffic, demonstrating the volume of their commitment circulated too. One passenger screamed that the man blocking traffic loved communism and should go to China.

The dueling protests make conflicting claims about expertise, status, and information. Health care workers, who normally enjoy public esteem, and now are ritually cheered in communities around the country each evening, are deploying their status and their experience to serve as a counterweight to the passions of people who proclaim they want to make their own decisions about work and risk and community.

And the conflict won’t get resolved in front of Arizona’s state capitol or the streets of Denver. The debate about ending a public health lockdown has become even more heated and partisan in the streets. More important is how the images from those protests carry to a larger audience. The rest of us are invited from a distance to take sides.

In a different political moment, leaders would encourage us to remember that everyone wants to protect public health AND resurrect as much of the life we had before as possible as soon as possible. The politics could be about figuring out how to do so, gathering information and managing risks.

That’s not the moment we’re in.