Protest is contagious; where we are….

The first picture is of a open up protest at the Wisconsin state capitol in Madison, on August 24, featuring a turnout estimated at a couple of thousand people, certainly one of 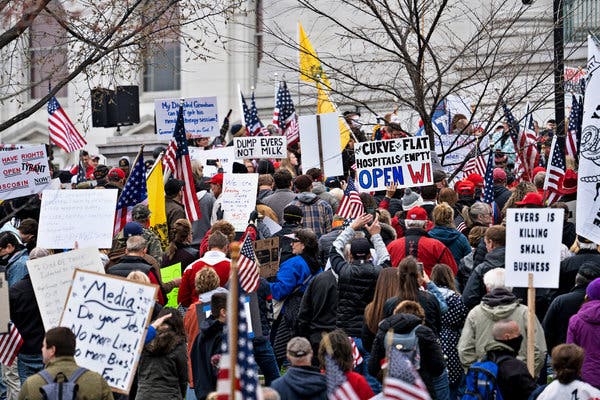 the largest turnouts at these protests so far. The protesters are challenging a Democratic governor ordering policies they despise.

Below are other images of protest in Madison, taken from large demonstrations directed against a Republican governor implementing policies activists found abhorrent.

Frustration, desperation, anger, and optimism sometimes lead people to take to the streets in protest.

Saints and psychopaths will turn out to protest without apparent prospects for influence, but most of us won’t. Most of us will engage in protest action only when we think it might work, and we take up tactics that seem familiar enough, safe enough, and potentially effective. 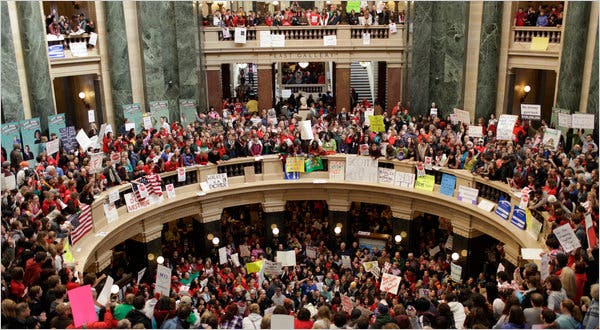 We don’t make any of these decisions in a vacuum, and the efforts of others matter. When people with grievances learn that others with a cause have staged drive-by protests in the COVID moment, they can pick up the approach and apply it to other causes. Open up protesters grabbed a tactic used by immigration rights activists. The tactic isn’t limited to a particular cause.

And when health care workers see nurses and doctors standing up to bear witness against the open up protests, they can pick up the tactic and the cause. Their shared identity makes it easier to sign onto the cause. 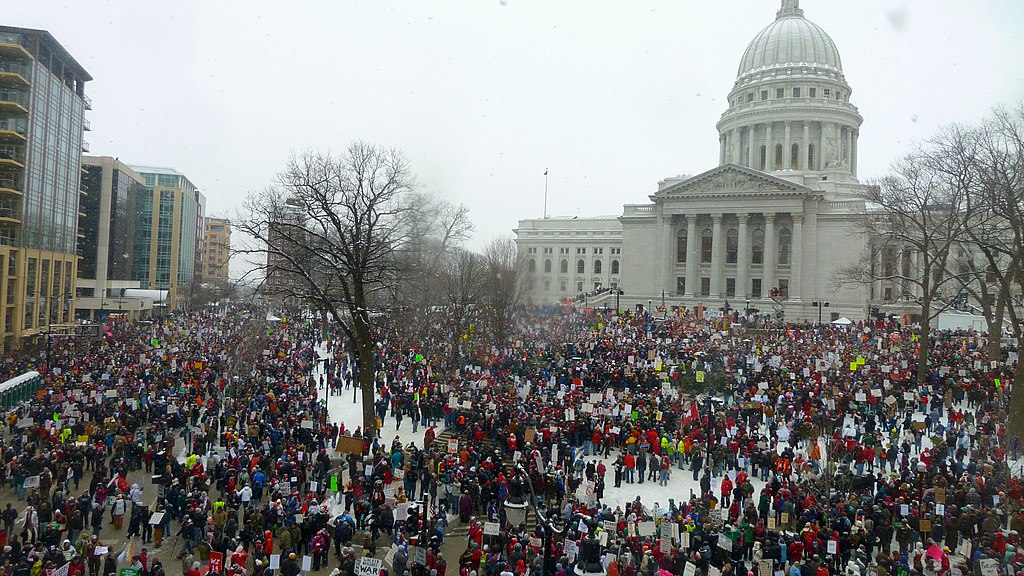 The story of a protest event makes for a demonstration (!) effect that a cause is important and urgent enough and/or that a tactic might work.

The flow of ideas and tactics doesn’t take place on a level field. Sometimes, the news spreads along the lines of mainstream media networks. In ancient times, activists tried to get their events and sometimes even their ideas into the newspaper or on broadcast television. Support from a visible politician with ready access to audiences can amplify those efforts.

But you can’t depend upon news outlets or politicians to carry your message your way loudly enough.

Organizers work to amplify and interpret activist efforts in one place to broader audiences. By publicizing events that have taken place, and announcing planned events in advance to receptive audiences, well-established conservative groups have encourage frustrated people to take to their cars–or to the streets. Publicizing images of protesters with guns and without masks suggests a model, and abundant social media networks promote alternative interpretations and alternative facts about the causes of the pandemic, its severity, and appropriate remedies. Organizers try to use the protests to promote their own version of important grievances and their proposed solutions, changing public opinion and broad notions of what’s possible.

So, protests about opening up the economy also became protests about gun rights and support for the Trump presidency. The broader agenda likely turns off many people who might agree on the initial issues, but it intensifies the commitment of those engaged, and increases the space between them and a larger public.

At the moment, we really don’t know how far any of this will spread.

The 2011 protests in Madison were much larger than this week’s protest, so far, and they extended over weeks. But demonstrators were risking the cold, not a deadly virus. Those 2011 protests didn’t stop the anti-labor legislation Governor Scott Walker championed. They were, however, an early blast in a much larger  that generated Occupy later in the year. The protests helped focus public attention on growing inequality, and it mattered.

It’s unclear whether the movements of the moment will do the same.

Author and professor of Sociology and Political Science at the University of California, Irvine
View all posts by David S. Meyer →
This entry was posted in Uncategorized and tagged contagion, COVID-19, demonstration effect, diffusion, Madison, nurses, open up, Wisconsin. Bookmark the permalink.

1 Response to Protest is contagious; where we are….