Honk if you hate government. A report from Lansing:

Activists are always looking for ways to demonstrate their concerns. A good tactic 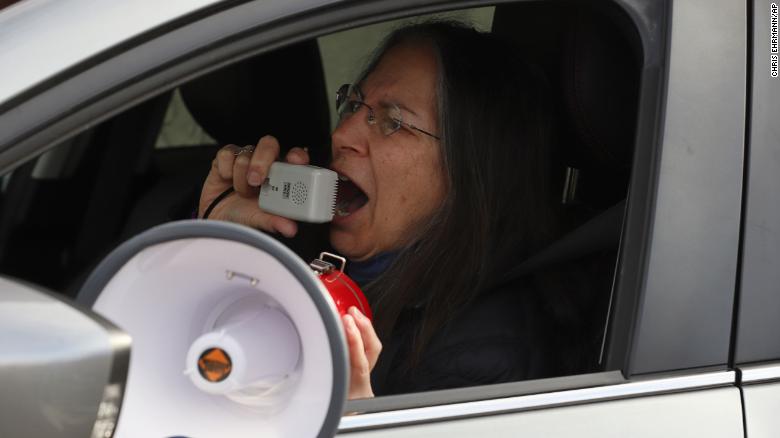 energizes your supporters, discomforts your opponents, and engages bystanders. Despite the extraordinary range of imaginable activities out there, most movements across the political spectrum rely heavily on a pretty narrow repertoire, and mass demonstrations are a familiar ingredient.

COVID-19 changes all that, and organizers are looking for alternatives (discussed here). So, maybe in the era of Carpool Karaoke and Comedians in Cars Getting Coffee, the automobile is an answer.

People in cars can protest. A car offers the recommended social distance, some physical protection, and it takes up much more space than a body, amplifying the size of a  demonstration. It’s certainly not a routine part of American protests, but it’s also not completely new. [Please note, Catherine Shoichet wrote a good article about car protests, focusing on immigrant rights protesters honking for justice in Arizona.]

In Charlottesville in 2017, a white nationalist unhappy about the anti-white nationalist protest drove a car into demonstrators, killing Heather Heyer. The driver has since been sentenced to life in prison.

Years earlier, in 1964, a flank of civil rights protesters in New York City threatened to shut

down the roads to the World’s Fair. (Because the world’s NOT fair.) But lots of demonstrators took mass transit and the threat turned out the generate more attention than than the action.

Ideas, tactics, and even rhetoric aren’t limited to particular groups or causes. Instead, organizers watch their other social movements–including their opponents–to prospect for new approaches that seem to work. So, White people opposed to desegregating public schools in Boston in the early 1970s deployed the whole arsenal of tactics (pickets,

demonstrations, sit-ins, and so on) that they’d learned from watching the civil rights movement.

We’re likely to see a wide array of groups try motorized events this year, until police develop effective ways of containing them.

Yesterday, a couple of thousand cars drove on the Capitol building in Lansing, Michigan to protest Governor Gretchen Whitmer’s strict lockdown orders. At this writing, Michigan has recorded nearly 30,000 COVID diagnoses and nearly 2,000 deaths. The shutdown there, as everywhere, has created grievances large and small: no haircuts; no school; no jobs.

Conservative activists in Michigan want the economy to “open;” they want to go to the stores, to work, to restaurants, and bars, and they claim that Gov. Whitmer is overreacting to a global pandemic, creating a r

emedy that is worse than the disease.

“Operation Gridlock” demonstrated the call to open the economy by shutting down Lansing, including part of the highway and an entrance to an area hospital.

The organizers urged the drive-by protesters to honk and chant and stall, but to stay in their cars and maintain social distance. But between the passions of the moment and the extraordinary skepticism about conventional medical wisdom on the new corona virus, a couple of hundred people left their cars and assembled in front of the Capitol.

A few protesters wore masks, but most did not. Lots of American flags were visible, and it’s also easy to spot a few Gadsden (“Don’t Tread on Me”) flags, along with a couple of Confederate battle flags. (It’s hard to remember all of high school history, but my memory is that 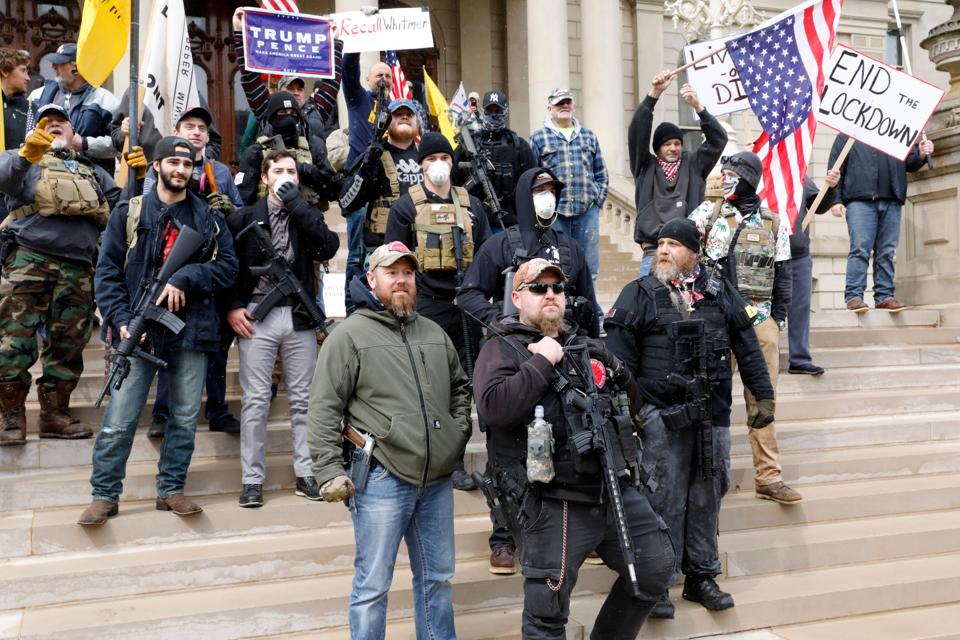 Michigan fought for the Union during the Civil War.) There was visible support for Donald Trump, and a familiar recurrent chant about Gov. Whitmer: “Lock her up.”

And there were lots of guns, as in the picture at right. Whether or not the organizers wanted this look, when passionate people are mobilized, it’s very hard to maintain control of just what they say, what they carry, or even what they do.

Protesters discussed developing herd immunity instead of isolation, but were more interested in citizen expertise on the matter than  the advice of immunologists or epidemiologists on the matter.

Those who are listening to the medical experts, inside and outside the government, will find the herd in front of the Capitol alarming, and will worry about the transmission of the virus, then carried back to the families of the demonstrators. We may not know of any infections for a week or two, by which time demonstrators will have found an alternative cover story.

5 Responses to Drive by tooting; protest in cars, COVID-19 5/x