Trump and the battle of Portland

The president of the United States is ready to sacrifice Portland, Oregon–to say nothing of the US Constitution–to buy into a longshot strategy for winning reelection.

Portland, like virtually every city in the United States, has seen large and somewhat 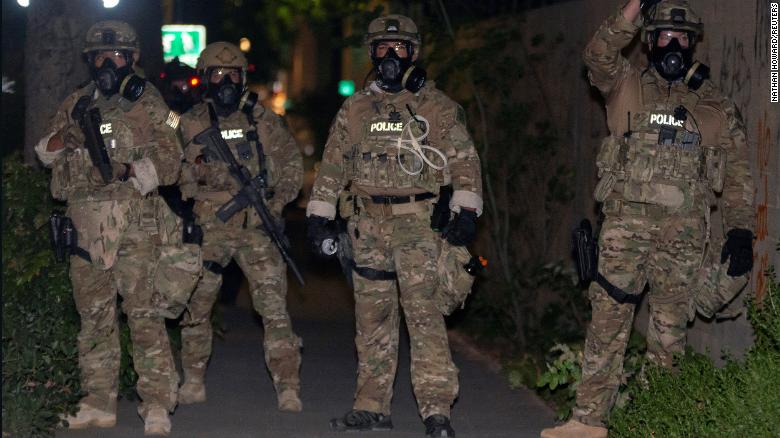 disruptive protests for racial justice and against police violence over the past seven weeks, but Mayor Ted Wheeler was confident that they were fading and would shortly end.

Donald Trump, facing bad poll numbers and worse news (increasing infections and deaths from COVID-19; no administration reaction to Russia’s offer of bounties for the lives of American military personnel in Afghanistan–for starters), would not wait.

Trump ordered the deployment of federal police forces.  [Note: It’s likely–and very important–that the military has been rightly resistant to deploy against American citizens, leaving Trump to look elsewhere for men with guns to fight for him.]

Dressed in camouflage, with no 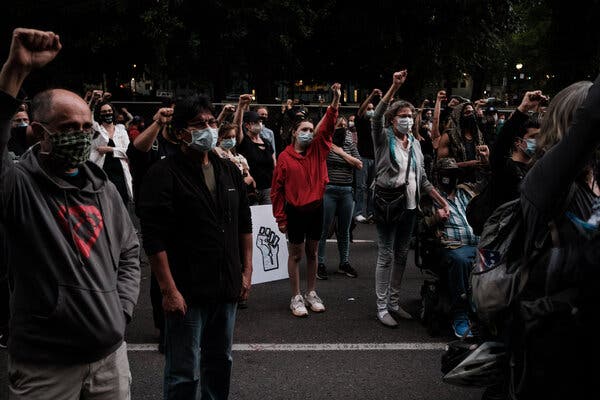 name tags visible, it’s hard to see just who they are and where they’re from. Some are from the Department of Homeland Security and from Customs and Border Patrol, but there’s dispute about whether the units are trained for the jobs they’re performing: riot control.

In Portland, however, there’s little doubt that the overwhelming majority of the protests are peaceful. In Portland, and in at least many parts of the United States, people remember that the first amendment to the Constitution guarantees a right to protest. Here’s the text:

Congress shall make no law respecting an establishment of religion, or prohibiting the free exercise thereof; or abridging the freedom of speech, or of the press; or the right of the people peaceably to assemble, and to petition the Government for a redress of grievances.

But forget the Constitution for a little bit–the White House certainly has–and just consider whether deploying well-armed militia to an American city is an effective way to deal with a protest movement.

The federal forces have been recorded beating protesters, using tear gas, and firing flash bangs and rubber bullets. They’ve also pulled people off the streets and into unmarked rental vans for questioning. They’ve not coordinated with local police–another problem.

So, state and local officials have complained, demanding answers–and the withdrawal of the militia. The State of Oregon filed a lawsuit. So did the American Civil Liberties Union. There will be more.

Trump and the Department of Homeland Security have refused to consult, much less to leave.

The protesters also refused to leave. Instead, their numbers are growing, their tactics diversifying, and their anger growing. The nightly confrontations have made for powerful and disturbing images: 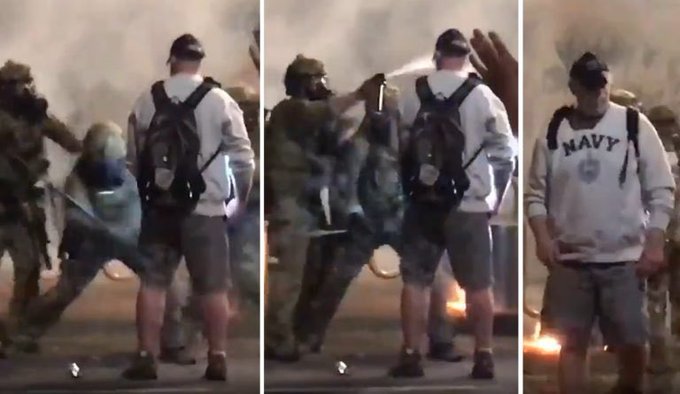 Chris David, a 53 year old Navy veteran, showed up one night after the feds arrived, to ask the men in camouflage what they were doing and why?

He stood through repeated baton blows, but turned away and retreated when he was pepper-sprayed.

A “Wall of Moms” took to the streets, standing between the feds and the protesters, hoping to prevent violence–or, failing that, to generate powerful pictures to spread across the 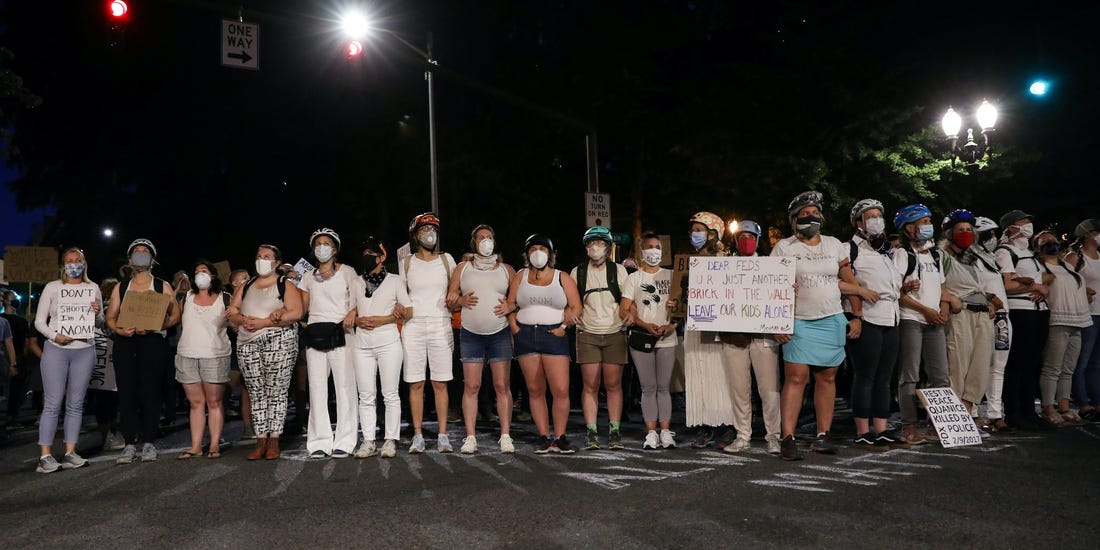 They couldn’t stop the tear gas or the charges, but they inspired many others to join them. Now, each night, there are more moms, many  wearing yellow t-shirts, and often bicycle helmets, and sometimes gas masks, are taking to the streets. 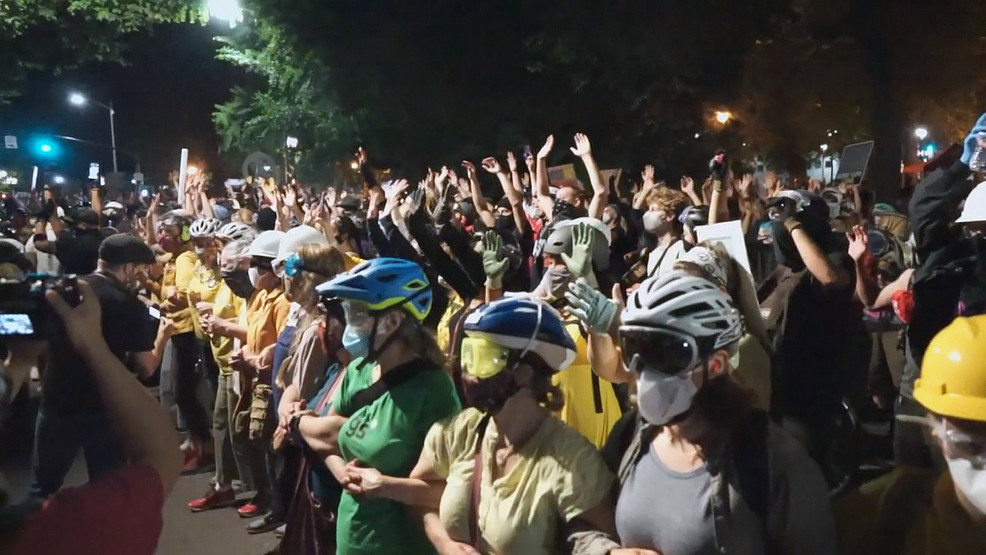 The  Portland  Wall  of Moms inspired other women to organize groups in a few other cities–so far. There will be more.

And more protesters are turning out, and they’re trying to come prepared to claim their space from the feds. And they’re coming with makeshift protection and provocation: helmets, football pads, masks, pool noodles, umbrellas, and makeshift shields made from plywood or sleds. 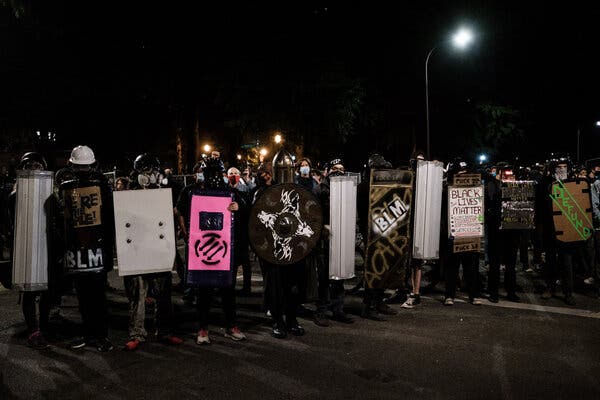 Some of the protesters are committed to nonviolence, but not all, and there have been attacks on the feds.

There is no question that the immediate reaction to uninvited federalized policing has been more disruption, more property damage, more grafitti, more danger, and far more local support for the protests. The cause of Black Lives Matter was now grafted onto rights for free assembly and local government control.

This was all predictable.

It’s possible that no one in the Trump White House was clever or curious enough to realize that harsh policing of the protests was likely to generate exactly this response.

It’s also possible that the Trump advisers just wanted to produce the pictures of confrontation and violence, creating the American carnage Trump predicted, and offering a distraction from worse news (COVID-19; economic decline; Russian bounties; corruption corruption corruption) to show the president as some kind of fighter to the credulous. Republicans were never going to carry Oregon anyway, and the pictures of federal forces confronting citizens–even white ones–might inspire Trump’s base.

In short: Trump is willing to destroy Portland to save himself.

In the slightly longer run, I can’t imagine that well-armed federal police won’t be able, finally, to inflict enough damage to send the protesters home. The horrible question is how many casualties this will take.

2 Responses to Trump and the battle of Portland