Wall of Moms; Lawn of Dads 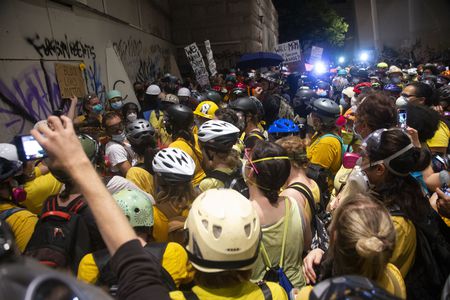 The battle in the streets at a demonstration is far less important than the battle in the stands, as those watching decide who to root for and, sometimes, to try to help. This means that even as protesters and authorities strategize for tactical advantage in a confrontation, they should also be thinking about how those watching are likely to respond.

Remember, police in Selma in 1965 were able to turn back peaceful civil rights marchers using tear gas, dogs, and clubs. It didn’t look like a win. Local authorities decisively cleared the bridge, but–because lots of other people saw it–lost the larger struggle for public opinion.

The Trump administration’s decision to send federal forces to police the streets at night, purportedly to protect federal property, has turned out–as anyone could have predicted–to be a strategic disaster. It’s not going so well for the feds in the streets either. 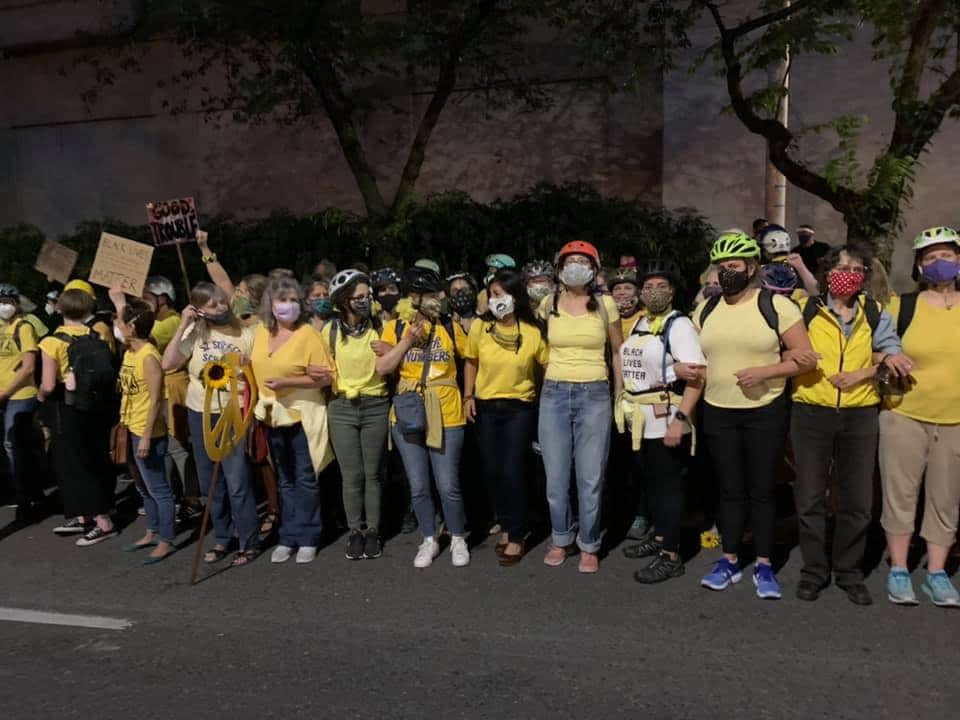 They chose the protesters. Every night, there are more protesters out in the streets, and the feds are working more aggressively to contain them, with gas, pepper spray, rubber bullets, and sticks.

But the protesters are developing their own innovations to try to stay in the streets.

Bev Barnum, a Portland mom who saw videos of confrontations in the streets, posted about her frustration on Facebook:

As most of you have read and seen on the news,protesters are being hurt (without cause). And as of late, protesters are being stripped of their rights by being placed in unmarked cars by unidentifiable law enforcement. We moms are often underestimated. But we’re stronger than we’re given credit for.

She called for other moms to turn out in the streets to stand between the mostly young protesters and the police. Maybe it would deter the feds. If not, it would send a message to the rest of the world about what was going on.

The Wall of Moms didn’t stop federal law enforcement at all; the women in the protective wall were gassed and beaten too. But the pictures were powerful. 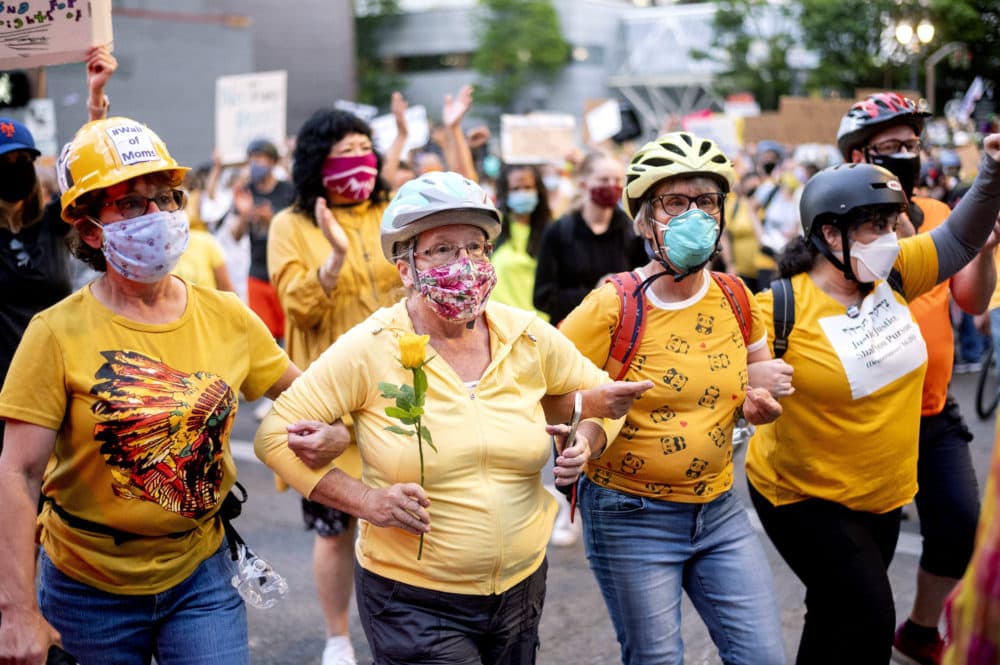 Each night, more Moms have been turning out, generally wearing yellow, with goggles, masks, and bicycle helmets. They chanted:

Social media made it easier to get the word out and turn the moms out. In the following days, protesters have formed new Wall of Moms groups in at least a half-dozen other American cities. They make it harder for the police to clear the streets, and much harder for Trump to dismiss the protesters as anarchists, antifa, or other sorts of radicals.

It’s not just moms. Dads have also turned up in Portland, organizing online and wearing orange. So far, they’re called PDX Dad Pod or DadBloc, and they’ve been brandishing the suburban terror device, a 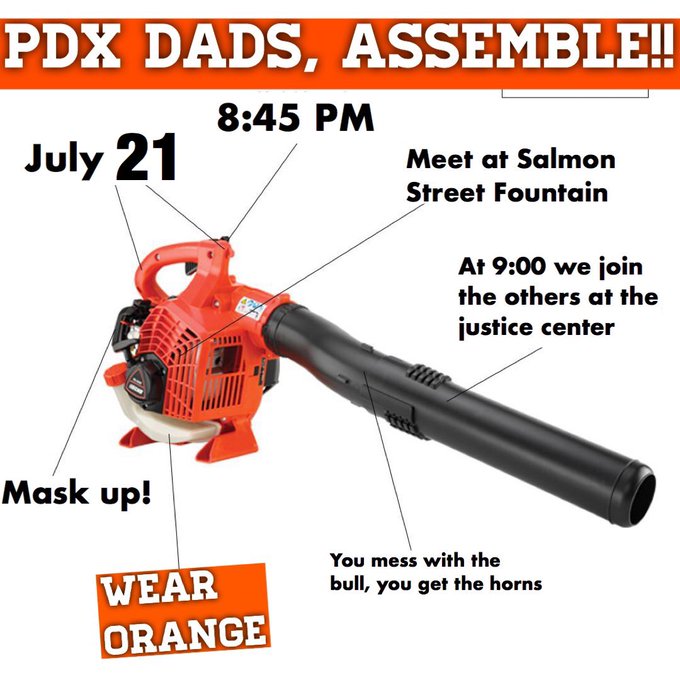 leaf blower. Reports on social media suggest the blowers provide some defense against tear gas, allowing the protesters to stay in the streets a little longer. They’re also wearing masks and googles and bicycle helmets.

I think everyone in Portland wears a bicycle helmet.

By sending federal police into Portland, Trump has raised the stakes and brought passive supporters off the sidelines. He’s made it harder 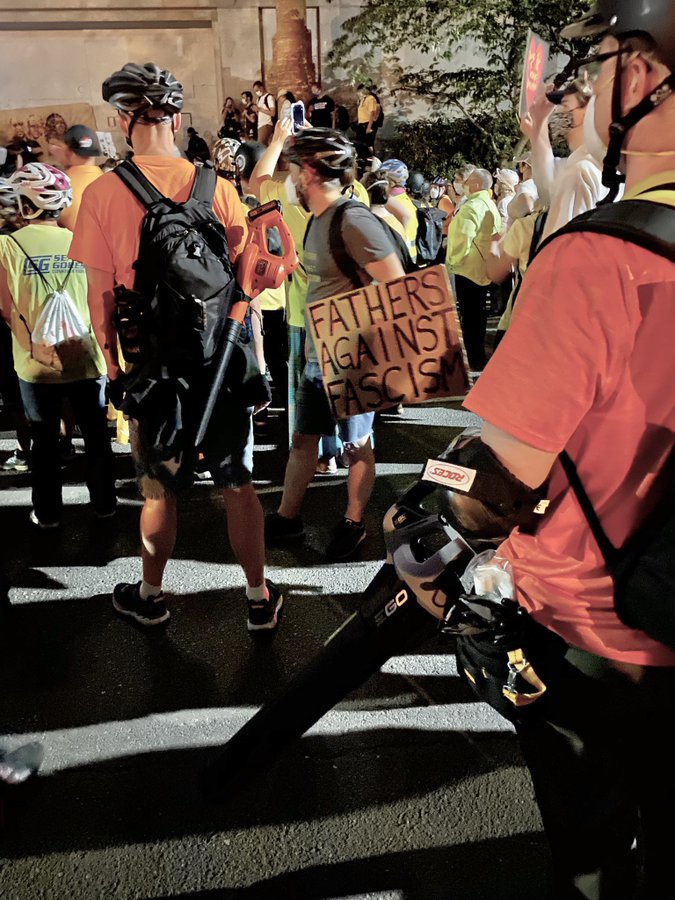 for authorities to control the streets, and provided larger audiences to his opponents. And the harsher treatment the decidedly non-militia Portland parents in the streets receive, the more public support they’ll gain.

Meanwhile, the almost spontaneous strategic action of the Moms and then the dads has created a seed for new organizations and new commitments. Take a look at a brand new website, in which the activists commit to the cause and to Black leadership.

Civil rights strategists in the 1960s actively sought out sites for protests where local police were likely to overreact, where police chiefs and commissioners of public safety were not necessarily so smart or strategic.

The Trump response has imposed its own poor political judgment on local authorities everywhere.

Someone in the White House should be thinking about this.

1 Response to Wall of Moms; Lawn of Dads