SeaWorld is building larger pens for the killer whales it keeps as performers and tourist attractions.  It also announced an enhanced focus on research.  Where did this come from? This is the movement story: Shamu, the stage name of the killer whales that perform at SeaWorld, has been the subject of animal rights activism for years.  And what a great case!  Orcas are large, smart, social mammals, who live shorter, constrained lives in captivity.  I really don’t know what they feel, but in captivity, their distinctive dorsal fins droop, sadly.

In 2011, PETA filed an unsuccessful lawsuit arguing that orcas were entitled, as non-human persons, to 13th amendment protections against involuntary servitude.  In

2013, documentarian Gabriela Cowperthwaite released Blackfish, which focused on the sad story of Tillikum, an orca captured by SeaWorld, who was involved in the deaths of three people.  SeaWorld refused to cooperate with making the documentary, filed a complaint with the Department of Labor protesting that its employees did, and published its own factsheet on line disputing the film.  And all the while, activists have been demonstrating outside SeaWorld.

This past year, state legislators in California and New York proposed legislation that would prohibit orca performances or keeping killer whales in captivity altogether; nothing’s passed so far, and SeaWorld promised to relocate any killer whales to theme parks in states with less strict rules rather than release or retire any of them.

So, the lawsuit failed, and the new laws stalled; but you don’t have to win in order to effect influence.  Attendance dropped at SeaWorld; at least some parents planning vacations didn’t want to answer questions about the droopy fins.  The company’s stock price collapsed.  Prominent musicians canceled dates performing at the theme park, and other businesses, like Southwest Air, severed their ties with SeaWorld.  Credit rating agencies lowered SeaWorld’s bond rating, making it more expensive for the company to borrow money.   What to do?

SeaWorld announced that it would be providing larger pens for the orcas, twice the size of the present tanks.  It didn’t credit PETA or protests for this decision, but emphasized how the care of the whales was always a top priority. 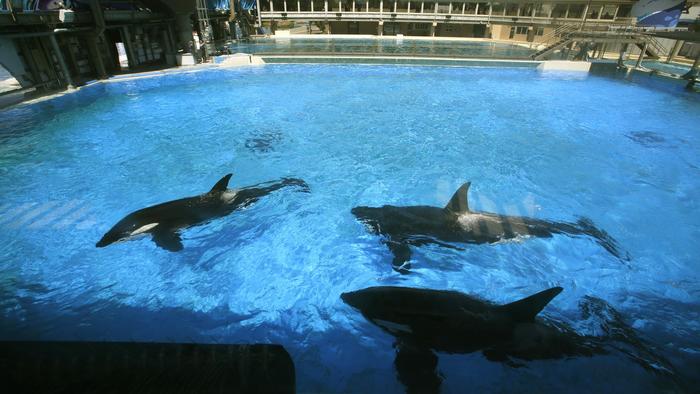 Of course, larger pens are hardly what the campaigners were after, and they’re not satisfied.  See the report at Sea World of Hurt , a campaign sponsored by PETA.

But this is one way movements work.  The animal rights campaign made the captivity and conditions of the orcas an issue, and it hurt SeaWorld, even if the campaigners were targeting for so much more than that.  SeaWorld is trying to recapture market and reputation, doing something different in response to the changed world the movement campaign created.

We know at least two things: The animal rights activists will demand more.  And SeaWorld won’t credit the activists.

What we don’t know: Is building larger pens and nodding to research enough of a change to get some of those families to rebook visits to SeaWorld and see killer whales next year.