How to claim someone else’s platform….or not.

#NotTodayManBun is my favorite hashtag of 2019, so far. 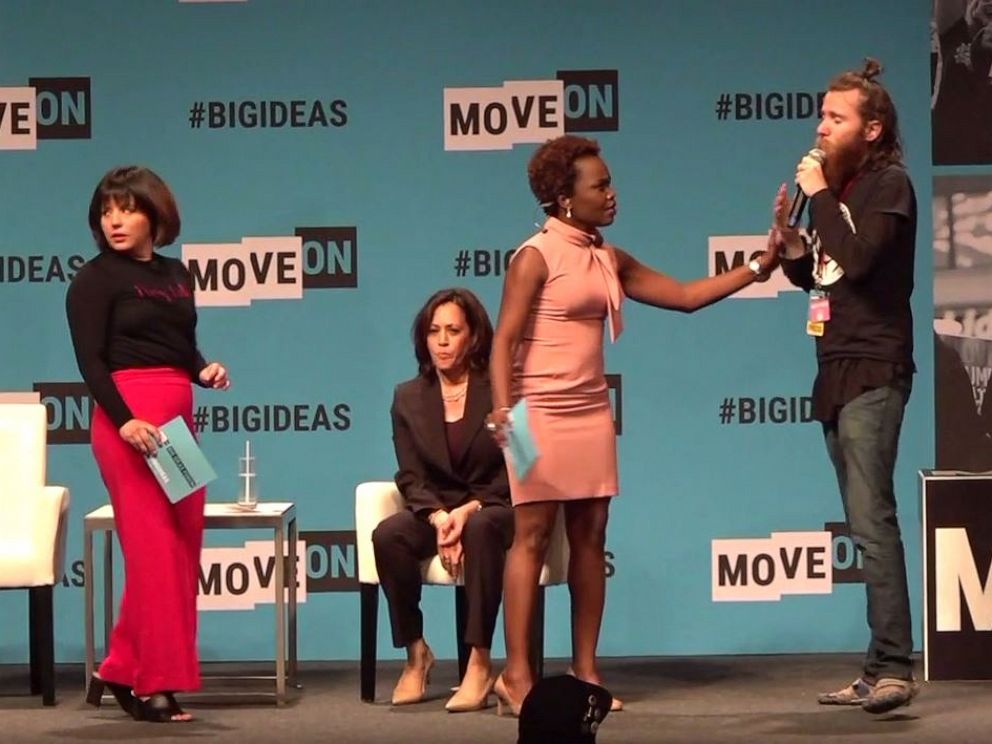 I think it was about protecting people who stage animal rescues at farms and slaughterhouses from prosecution. It’s hard to know for sure, because his mic was cut almost immediately.

Karine Jean-Pierre, national spokeswoman for Moveon and frequent tv commentator, was moderating the panel; she is the hero in most Twitter accounts of the event. I’d have said Jean-Pierre was quick on her feet based on her wit, but she proved physically quick as well. In the video circulating everywhere, Jean-Pierre immediately positioned herself between Sen. Harris and Cook, pushing the much larger transgressor to the margins of the stage and grabbing at the mic. In very short order–the whole event took less than 30 seconds–larger folks took stage and escorted Cook off and out. No criminal charges were pressed.

In his spotlight moment, Aidan Cook claimed that he intended to show due respect to the women on the panel, and tried to remind the public that he had tried to grab the mic at one of candidate Bernie Sanders’s events three years earlier. He wasn’t the only person rushing candidates’ events. Occupy activists drove a flustered Michele Bachmann off the stage in 2012, and Black Lives Matter activists seized the stage from Sanders four years later.

Presidential campaigns, which bring their own crowds and attract mainstream media, provide lots of great sites for protest movements. But when is seizing the platform a smart strategy, and when is it just silly?

You see, I don’t think Cook’s transgressive protest did much for his cause, animal rights. In general, to count as a win, you need to get people to talk about your issue–in addition to your tactic. But most of the online discussion focused on Cook’s size, his hairstyle (see #NotTodayManBun, above), and his shoes; overwhelmingly, he generated ridicule.

You could say that any transgression is inappropriate, but I think that’s a mistake. The Black Lives Matter activists ultimately influenced not only Sanders’s rhetoric, but also Hillary Clinton’s campaign, and certainly virtually all of the Democratic contenders this year. It’s tempting to pick the causes we like, and justify whatever their advocates do, but I think we can do a little better.

BLM activists represented a cause with support from a large share of Democratic voters that was getting little attention from the Democratic presidential hopefuls. When activists seized the stage, they had allies in the larger audience, cheering, or at least ready to listen.

In contrast, Direct Action Everywhere has made no visible inroads in either political party. The local audience was eager to hear what Harris had to say about student loans.

It’s too easy to conclude that Cook picked a poor strategy, and much harder to come up with an approach that might work better. I’d guess that animal rights activists could learn from the very successful long haul strategy to target Seaworld, and to continue to nest claims against factory farming in the larger cause of climate change.

The successful transgressive moment depends on lots of organizing beforehand.

When you take the stage, you want to know there are at least a few people eager to see you there.