Flag battles at Hampshire College: the politics of diversion

Do you want to talk about the American flag? Hampshire College, in Western Massachusetts has (temporarily) removed the flag from its central flagpole to foster a 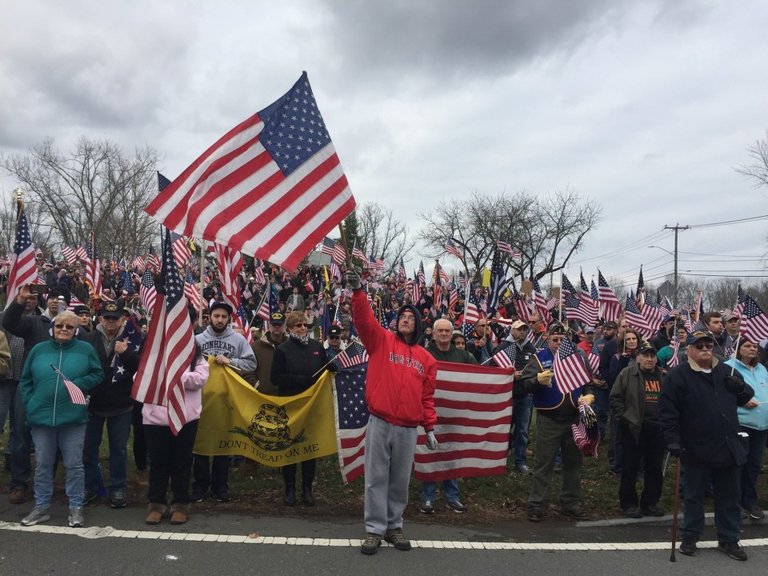 dialogue about symbols. Upset about Donald Trump’s election, the next day students lowered the flag to half-mast, intended to be a peaceful protest about “the toxic tone of the monthslong election.”

This didn’t calm everyone–or maybe anyone; the following night, a group of students took down the American flag  and burned it. Hampshire replaced the flag for Veterans Day few nights later.

Students protested, explaining that they saw the flag as a symbol of inequality. In response to, uh, heated discussions, President Jonathan Lash ordered that, for a while, no flags would be flown from the main flagpole at the center of campus. In an email, he explained, “This decision to temporarily not fly the flag was intended to provide space to continue the campus-wide dialogue. The flag had become a heated symbol that was making conversations on campus this month impossible.”

As a sometimes proud alumnus of Hampshire College, I received his e-missive. I am most certainly not proud that President Lash thought the presence of an American flag in the driveway made honest and rational conversation impossible.

On Sunday, November 27, a group of veterans and their families brought their own flags to Hampshire College to protest in support of the flag. The New York Times cited protest organizers’ estimate of the crowd at about 400–as did local media; Fox News estimated about 1,000 veterans visiting campus. (I wasn’t there.)

Donald Trump saw the Fox report, and responded via Twitter that flag burning shouldn’t be permitted, and should certainly be punished, perhaps by jail or loss of citizenship. T

rump’s tweet created a predictable round of responses, including discussions of Constitutional law, and another round of flag-burning outside Trump International Hotel by a fringe left group.

We can expect another round of outrage and reaction about the flag, the Constitution, symbols, patriotism, privilege, and Trump. None of it is likely to lead to anything resembling either civil or productive politics.

I’d like to unpack at least some of the massive amount of idiocy that we witness unfurling from a flagpole in Western Massachusetts–in the absence of a flag.

The flag burning at Hampshire was certainly legal, Constitutionally-protected, silly, and stupid.

First, some easy stuff: Burning an American flag doesn’t violate the laws of Massachusetts or the United States, and is a Constitutionally protected expression of free speech. I know this from a 1989 Supreme Court Decision, Texas v. Johnson, which found that Gregory Johnson’s burning of an American flag in a protest outside the 1984 Republican National Convention was “expressive conduct” protected by the First Amendment. The late Justice Antonin Scalia joined the majority decision, later explaining that the plain language of the Constitution was clear. President-elect Trump has previously cited Justice Scalia as a model for his own appointments to the Court.

As Justice Scalia would surely agree, many activities that the Constitution protects are unpleasant and unwise.

Second, it’s not surprising that students at Hampshire, like so many other students across the United States, were upset and disappointed by Trump’s victory in the electoral college. Most voters really did oppose him, and his campaign offered much to terrify supporters of, for example, immigrants, ethnic minorities, reproductive rights, public education, and the Constitution. (Obviously, this list could be so much longer.)

But Donald Trump doesn’t own the burned flag in South Amherst, nor the symbol for the entire United States. Hillary Clinton would have been inaugurated in front of the same flag; for that matter, Bernie Sanders, Jill Stein, Gary Johnson, or Evan McMullin would

have waved the stars and stripes as well. Trump’s victory hardly reflects well on the country, but the flag stands for a big diverse community filled with conflict and contradictions. It’s foolish to let it become a symbol for Donald Trump. There’s no reason for activists on the left to cede the symbol to their political opponents (see Abbie Hoffman, at right). Civil rights activists, for example, refused to allow the Ku Klux Klan to claim a monopoly on the flag.

As a political tactic, the battle over the flag is completely counterproductive to the interests of those who started it. Protest is most effective when it promotes discussion and activism on the issues animating it. A tactic that overshadows the cause becomes a burden for activists and a bludgeon for their opponents. Protest polarizes, and savvy activists try to gain political advantage by picking issues, tactics, and rhetoric that draws larger numbers to their side.

But the story from the Pioneer Valley is all about the flag, privileged students, and angry veterans. At best, this is a distraction from real politics; at worst, it offers as substitute a new conflict on which many Americans are more likely to agree with Trump than the Supreme Court–much less the students.

Fights about the flag are hardly new or unusual, and have appeared in Politics Outdoors. For example:

A few students at the University of California, Irvine, pushed a resolution to ban all flags from a specific lobby, provoking a visit by a small group of flag-loving Orange County residents.

police violence by kneeling during the national anthem before games.

3 Responses to Flag battles at Hampshire College: the politics of diversion