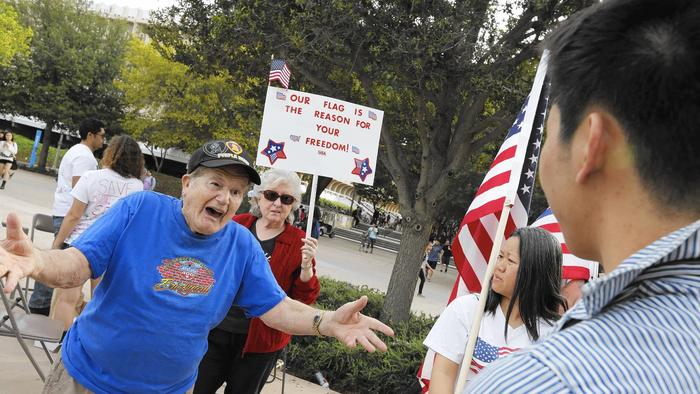 Amazingly, national interest in the flag conflict at the University of California, Irvine, where I teach, is unwavering.  More than a few people seem to think that there is political mileage in beating up on a few students who sponsored a resolution to ban all flags from one lobby on campus.

It’s worse than that.  Recall that the resolution was ultimately defeated.  A meeting to discuss the issues has been repeatedly cancelled because of what campus authorities judge to be credible threats of violence.  And veer to the comments sections of the news reports, and see anonymous posters proclaiming that the student sponsors–or even the whole university–should be tortured, killed, or sent back to…..(Temecula?)  Audiences are unhappy with what they think some UC-Irvine students are learning.

But as anyone in education knows, what students learn isn’t always what teachers teach.  [I don’t hold Senator James Inhofe’s proud ignorance about climate change against the University of Tulsa, his alma mater. Nor do I think that the fact that Chief Justice John Roberts and President Barack Obama differ on questions of Constitutional interpretation reflect badly upon the teaching at Harvard Law School.]

Clearly worried about the political fallout, at UC-Irvine, Chancellor Howard Gillman proclaimed his commitment to build more flagpoles, and hoist more American flags.  (LA Times columnist Robin Abcarian appropriately questions whether this is the best use of limited funds on campus.)

To make sure this tempest in the tea party doesn’t die down so that we can focus on something more useful, someone circulated a letter online, defending the students who sponsored the flag ban, and some of the thousand plus signatories were faculty members at UC-Irvine.  (I didn’t sign the letter, nor was I asked to.  I glanced at list of supporters quickly, and didn’t see anyone I knew–and I’m not looking to keep score.)  Support for the students and their right to propose policies that improve the campus is entirely appropriate, as is concern for their physical safety.

But a conservative website found the letter, and proclaimed that the UC-Irvine faculty supported banning the flag.  Alas, the statement is poorly written, but I don’t see that prescription in it.  Anyway, it was certainly no less articulate than the drunken frat boys singing an explicitly racist and threatening song at the University of Oklahoma.  Free speech.

We know that opportunists all over are trying to use this dust-up to promote their ideas and themselves.  That’s America.

It’s also America to have disputatious discussions and differences of opinion about all kinds of things.  In the background to the photo above, behind the flagpoles, you can almost make out the library,  which for the university is something far more important, far more expensive, and far more difficult to maintain.  I hope that the visitors who came to yell at students for their ingratitude also visited that building.  In the stacks you can find The Wealth of Nations by Adam Smith, and The Communist Manifesto by Karl Marx and Frederich Engels, and of course, the US Constitution.  But all of that is in the public domain, and you can easily find those texts online.

But the library contains so much more than that.  There are classics of literature and pieces of fiction that feature curses.  Mark Twain’s Huckleberry Finn is there, offensive language and all.  There are paper copies and electronic access to extremely expensive academic journals where students and faculty can read the latest research on the employment effects of a hike in the minimum wage (economists disagree), or the human causes of climate change (climate scientists agree).  It’s a great place to spend four years–or for some of us–even more.