Posted on August 22, 2020 by David S. Meyer
Today, a coalition of groups is staging a national campaign of protests in support of the United States Post Office.  (At right, see a demonstration in Royal Oak, Michigan.) 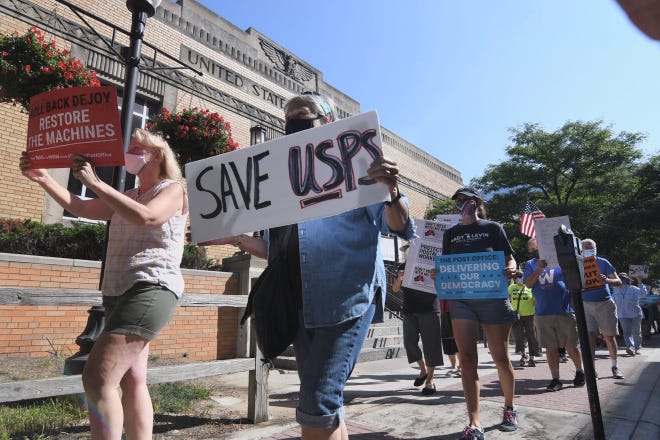 You can find your neighborhood event at this convenient website which, as of this morning, lists more than 800 of them.
At first glance, it seems odd that a basic government function appears at the center of a brewing political conflict about partisanship, democracy, rural America, and particularly elections, but here we are. And we’ve been here before.
The United States Postal Service provides vital public services that are used by businesses, individuals, and government, and has always enjoyed public subsidy. Private companies provide some of the same services, sometimes cheaper and faster, by avoiding responsibilities for the difficult and less profitable ones. The political challenge, for Republicans in particular, is that those less profitable areas include last mile delivery and post offices in rural America, which usually provides political support for conservative candidates for office.
Now, election services are at the center of the conflict. The new Postmaster General doesn’t come from the ranks of the service, but from the private sector and from the 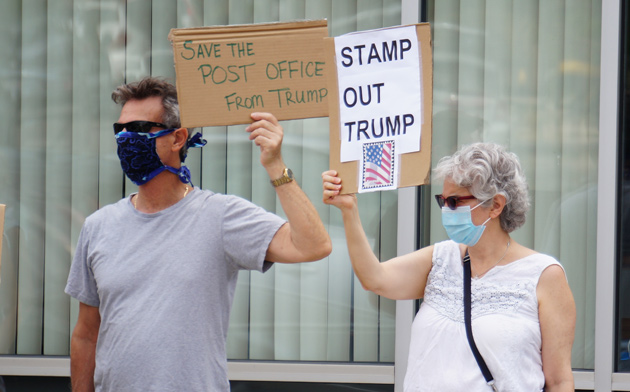 well of big Republican donors. In addition to the longstanding goal of hollowing out government services, Louis DeJoy is serving a president who vehemently opposes absentee or mail-in voting for people who won’t vote for him.
It’s not surprising that the president is willing to lie about all of this; what’s a little surprising is that rural Republicans are at least a little willing to stand up for services to their constituents.
The global pandemic makes voting in person a little scary and dangerous, particularly in areas where the number of polling places has been cut and lines are long. Mail-in voting, long in use across the United States, is an obvious partial remedy. Trump, probably mistakenly, sees only a personal threat. (In real life, Republicans also vote by mail, and the voting method  doesn’t offer consistent advantage to either party.)
Now, defending the post office, and public services more generally, has become 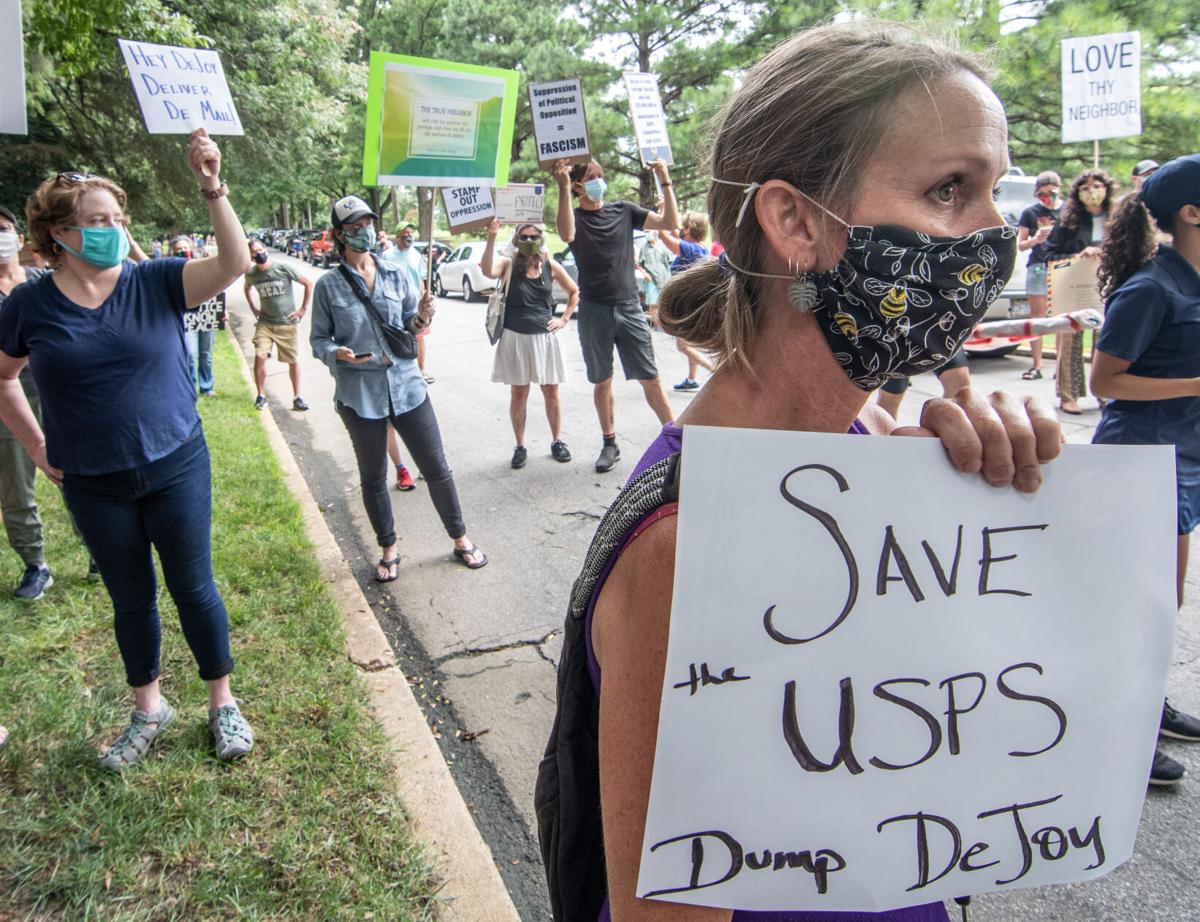 another way to attack Trump–probably a bad battle for the president to choose.
As soon as whistle blowers starting alerting the rest of us to cuts in services and removal of sorting machines, people started protesting–first at DeJoy’s homes. Today, the move was to post offices across the country.
But it’s important to recognize that the attack on the post office–and on public services more generally–has been festering for years, and activists have been trying to alert the rest of us all that time.
I posted this 8 years ago, on June 26, 2012. Neither the Obama administration nor the Congress has delivered for the post office in the past.

Ten current and former postal employees stopped eating yesterday in Washington, DC, starting a hunger strike to protest continuing cutbacks at the United States Postal Service.  Organized by Community and Postal Workers United, they do not plan to starve

themselves to death; they are, however, desperate to get public attention for their cause.

So far, this effort has worked–a little: Representative Dennis Kucinich appeared at their protest and endorsed the cause, and there’s been some coverage in local and national media.  But they’re fighting an uphill battle.

Fasting is never an easy route to political influence.  (We’ve discussed the strategy of hunger strikes here, as well as fasting campaigns by DREAM activists and prisoners.)  If postal workers thought they could depend upon allies in Congress or their union to stave off very large cuts in post offices and sorting stations (and jobs), they certainly wouldn’t be standing outside, hungry, in the summer in Washington, DC.

They have grievances about jobs and pensions, but their cause represents a much larger conflict in contemporary American political life.  Article I Section 8 of the Constitution gives Congress the power “To establish Post Offices and post Roads.”  The idea was that a reliable communication infrastructure was essential to building a nation.  Even before the Constitution, Benjamin Franklin ran the post office in Philadelphia, which was located in the offices of his newspaper, The Pennsylvania Gazette; both he and the city prospered.  Franklin served as the first Postmaster General of the United States.

Postmaster General was a Cabinet position for nearly 150 years, between 1829 and 1971, when the United States Postal Service moved from being a department to become a (somewhat) independent agency.  Somewhat?  Political figures wanted the Post Office to operate more efficiently and to cease operating as a haven for patronage.  They also

wanted the postal service to cover its own expenses. At the same time, politicians didn’t want to allow the post office to operate just like a business and close unprofitable offices.  Ironically, the least profitable offices tend to be located in rural areas, often represented by Republicans in Congress, representatives who are generally reluctant to see their local post offices closed.  So, the USPS is supposed to support itself, to compete with corporations for the most profitable services, like overnight mail, and to enjoy a monopoly on the services that lose money, like 6 day a week delivery of circulars in rural areas.

With email and electronic banking, most customers are able to reorganize most of their communications to bypass the post office anyway.  Once Grandma figures out how to slide a $5 bill into an email….

The postal workers are focusing on one particular Congressional restriction, the requirement that the USPS pre-fund its pension liabilities 75 years in advance; neither Fedex or UPS are similarly encumbered.  So, the government agency is supposed to compete against the private sector, but also operate within special restrictions in that competition.  Does that sound like anything else in contemporary politics?  Does that sound like everything else in contemporary politics?

A leaner more business-like USPS would focus on profitable services and areas, leaving sparsely populated areas to pay more and/or enjoy less service–or to support a new business that somehow finds a way to survive by serving such areas.  (Hint: it hasn’t happened yet.)  It’s a somewhat different America than imagined by Ben Franklin.

Whether the four day hunger strike, in conjunction with sympathy events, can succeed in putting the future of the USPS on the political agenda remains to be seen.  The hunger strike got my attention; you?